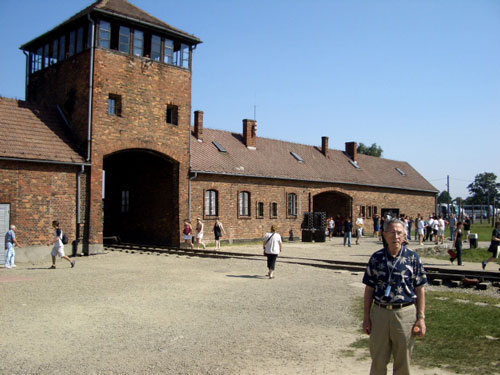 In Birkenau I saw the platform where they chased us out of those cattle cars and pulled us apart from our loved ones, only to never see or hear from them again. WHERE WAS THE WORLD?—WHERE WAS G-D? WHERE WAS HUMANITY? So many questions, but no answers. They showed us the torture chambers, the experimental rooms, etc.

Later on in Birkenau, they showed us the marsh area where they dumped tons of ashes in the swampy waters, which now after 61 years, still visible. Now they have many frogs living and surviving in those marshes among the ashes of our dear departed ones. They were showing us the fiery pits where so many bodies were dumped to be incinerated because the crematoriums could not process or burn the bodies fast enough. It hurts to know that humans are capable of such atrocities. This fact must always remain a Black Mark to Mankind.

However, there was one satisfying moment near the end of our Auschwitz and Birkenau tour. They have erected a new memorial monument near the blown up ruins of the crematoriums and near the dump site where all the ashes are scattered. 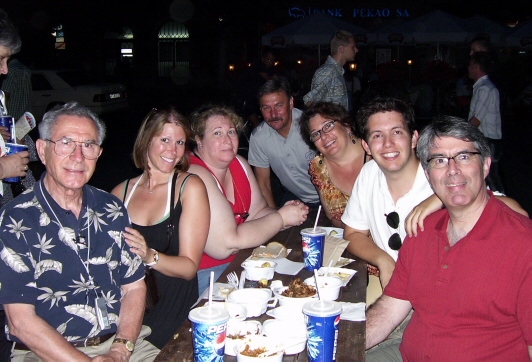 There happened to be a brigade of Israeli soldiers, men and women in full dress uniform. They were holding some kind of memorial ceremony. It was done in Hebrew with a speaker in front of them. They were also reciting the Prayer for the Dead.

P.S. I thank G-D daily for sparing the lives of my sister Lola and me and as I look at our children and grandchildren I see some hope for the future!!

Our last meal in the Jewish Quarter before departing to the airport.